The next Frothy Monkey Local Artist of the Week is Franklin’s own Cecilia Castleman. She debuted her first song “Lonely Nights” back in June alongside an interview with Zane Lowe on Apple Music. Castleman wrote the track with Daniel Tashian, who co-wrote and co-produced Kacey Musgraves’ GRAMMY-winning Golden Hour album.

Castleman has been working on her debut record, due this year, with Glassnote Records. Glassnote is also home to artists like Mumford & Sons, Two Door Cinema Club and Phoenix.

Castleman’s “Lonely Nights” cements her as an up-and-comer to watch in Nashville – and around the world. Her guitar playing and vocals make the track both a lyrical and instrumental success. Not to mention who plays on “Lonely Nights” with her, which include Tom Petty and the Heartbreakers’ Benmont Tench.

Castleman performed with Melissa Etheridge on July 30. Earlier in July, she opened for Sheryl Crow and Keb’ Mo’ on a couple tour dates.

You can see Castleman perform at Friday Afternoon Live this week at the Skydeck at Assembly Food Hall. Castleman will also hit the Lightning 100 stage again this Labor Day Weekend for Live on the Green.

Until then, check out the music video for “Lonely Nights” below: 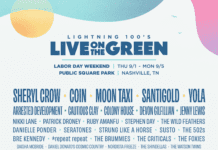 Lightning 100 Announces the Live on the Green 2022 Lineup