LORE is a Nashville based duo birthed from the minds of Laura Reed and Laur Joamets. Their first single, “Surrender”, is out on October 20 and will be played throughout the week as we feature LORE as our Local Artist of the Week.

Laura Reed is originally from South Africa and came stateside as a child. She ended up in Nashville, her father’s birthplace, to make music. She eventually built up her solo career which caught the attention of the iconic Paul Worley. Worley, along with a few other industry professionals, helped Laura to land spots in larger festivals further her solo career. By the summer of 2019 she had a handful of songs ready to make their way into the world, but she was still missing a guitarist.

Laur Joamets studied classical music in Estonia and developed a passion for American roots & blues. He followed that passion all the way to Nashville where he began playing guitar for Sturgill Simpson. After a few years of playing with Sturgill, Laur joined the band Drivin n Cryin in 2017 and began to tour with them. In the summer of 2019, Laur had a collection of instrumental songs that he had been collecting over several years. He brought the songs to Sputnik Sound to be mixed and released, but he decided he was missing a singer.

I think you can see where this story is going… Laura posted on Facebook about her need for a guitarist and friend passed it along to Laur. Thoroughly impressed with her vocals, he reached out to her. The duo returned to Sputnik Sound to record her solo EP, while still working on Laur’s instrumental album.

The two began to write together and book local shows around the city. It wasn’t very long until their musical styles morphed into one and their work progressed as a natural collaboration. This past February the two decided to officially join forces and combine their projects into one.

New onto the scene as a duo, but seasoned professionals, “Surrender” this week and we’ll be playing it as we feature them as our Local Artist of the Week. Catch it live on-air at 100.1FM on your dial or streaming live at lightning100.com 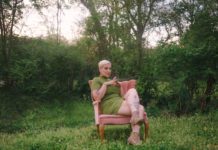