Lightning 100 recently had the pleasure of hosting George Ezra in the ONErpm studio for a secret show with Ana Lee! Ezra spoke to Ana Lee about his new album, Staying at Tamara’s, and his progression from the release of “Budapest” in 2014 until now. Having learned from touring extensively before recording Staying at Tamara’s, he focused on incorporating sing-along moments in his songs for his audience to enjoy. He then went on to perform an acoustic version of his latest single “Shotgun” for the small audience in the Lightning 100 office. When asked about the recording of his new album, Ezra talked about taking a month to live in Barcelona at a strangers home, where he spent his time journaling. The journal would then be sent to his co-writer, Joel Pott, who would select bits and pieces from the journal to turn into a song. This led to the writing and recording of Staying at Tamara’s. Ezra also talked about his influences including Woody Guthrie and Bob Dylan, and about his podcast in which he interviews other musicians, including Sir Elton John and Giles Martin. He wrapped up the interview by performing his hit song, “Budapest.” 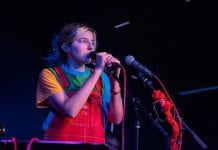