Houndmouth, J. Roddy Walston and The Business, and Cold War Kids graced the stage on the night of Thursday, August 27th, the second night of Live On the Green 2015.

As can only be expected in Music City, a crowd of thousands showed out at the second of six shows in Lightning 100’s annual free concert series held in Public Square Park.

The first of the evening was the Indiana-grown, vintage-indie band, Houndmouth.

Band members Matt Myers, Katie Toupin, and Zak Appleby played guitar, keyboards, and bass respectively and all sang lead vocals at one point or another, while Shane Cody kept the beat going on the kit.

“We’ve played together for a while now. It’s just good to do for the enjoyment of it, and I feel most connected to [the enjoyment] when closed off from the world. We’re from New Albany, Indiana and it’s the type of small town that I could get beat up in for wearing my skinny jeans walking down the street,” laughed front-man Matt Myers.

The old-fashioned folk and 1970s inspired group named themselves for nearby dogs who were continuously interrupting a recording session.

“At the time, we hadn’t been named but needed to be because we had one of our first gigs coming up, so one night we were sitting around drinking and recording in a tiny house, but these dogs next door kept barking and making it onto the tracks,” said Myers. “We were all having a good time and somewhere in the middle of the night, one of us hollered out ‘Houndmouth!’ and it stuck.”

Houndmouth charmed the crowd with fan-favorites such as “Penitentiary”, “Darlin’”, “Say It”, and of course, their current radio hit, “Sedona”. The set concluded with a fading sunset and the cheeky “My Cousin Greg”.

“It’s nerve racking to play here because everyone we know here in music is so outstanding,” said Myers. “Nashville is such a cool city. I’ve never known a place before that will have such an inviting, outdoor festival that goes on weeks and weeks like Nashville!”

Not too long after the first set of the evening came a band formed near Chattanooga in Cleveland, Tennessee: J. Roddy Walston and the Business.

With a long set and even longer hair, J. Roddy Walston struck the crowd and held the attention of thousands. He and his bandmates, Billy Gordon (lead guitar/vocals), Logan Davis (bass/vocals) and Steve Colmus (drums) won new fans over by the hundreds using a combinations of classic rock and a full-sized upright piano.

Walston lists Led Zeppelin, The Rolling Stones, and the folk and gospel genres as musical influences. All of these were heard during “Don’t Break the Needle”, “Heavy Bells”, and their current hit record “Take It As It Comes”.

The Indie-Rock four-piece group is headed up by lead singer, Nathan Willett, who is vocally comparable to Isaac Brock of Modest Mouse and Matthew Bellamy of Muse.

Crowds filed in under the blue stage lights from far and wide to conclude the night with Cold War Kids’ hits “First”, “Hang Me Up To Dry”, and “Miracle Mile”. The electric set ended with a cover of John Lennon’s song “Well, Well, Well”.

Come on out to Live On the Green next week to see Greg Holden, The Delta Saints, and Moon Taxi at Public Square Park on Thursday, September 3rd. Music starts at 6:15, but arrive early for games, food trucks, contests, and merchandise. 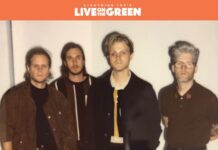